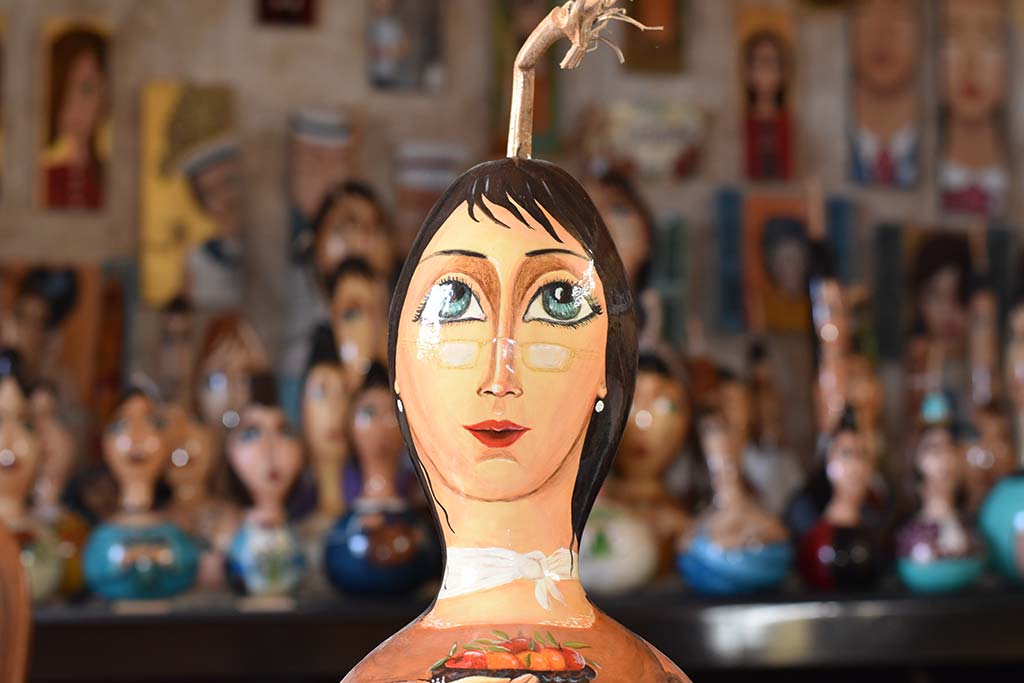 Pumpkin House was established less than two years ago. Traditionally, pumpkins were used on the Cypriot dining table to hold wine, and in the house to transport hot water for a shower or bash.

Before she opened Pumpkin House, Evi would sell her products in the various markets and bazaars in Paphos and Limassol.

Evi has been painting since her twenties.

Evi's grandmother gave her some paints, and she started to paint. Her inspiration came from the people and places she met in her life.

As well as Pumpkins, Evi also has many other creations. For instance, her shoe trees are themselves works of art. Shoetrees were traditionally given as charms on New Year's Day to keep evil spirits and the evil eye away from the house. In Evi's words:

I discovered the wooden shoetrees in grandfather's store room, at the old shoemaking shop. They were left forgotten on shelves, silent witnesses of an era where nothing was simple or imported. I was moved because they were wrapped up in human stories and dreams of handmade shoes worn with love and pride. I decided to give them a new lease of life and transform them to works of art, putting all the sensitivity, colours and imagination I had in me. From the store room of the shoemaking shop to the shelves of the modern homes, I created a bridge that unites the past with the present, the 1920s with 2016, as aesthetically beautiful as I could. A dedication to grandfather the shoemaker and all the forgotten shoemakers of yesteryear.

There are far too many creations to describe them all here. So look through the photographs, or better yet, pop into her shop in Old Town Pafos and visit for yourself. The nearest parking is at the Markideio Theatre car park, which is very large.

Do go and visit the Pumpkin House. You will not be disappointed.

Thank you for your order. You can either view and print your receipt, or continue shopping. Your receipt will also be automatically emailed to you as a PDF file, for your records.